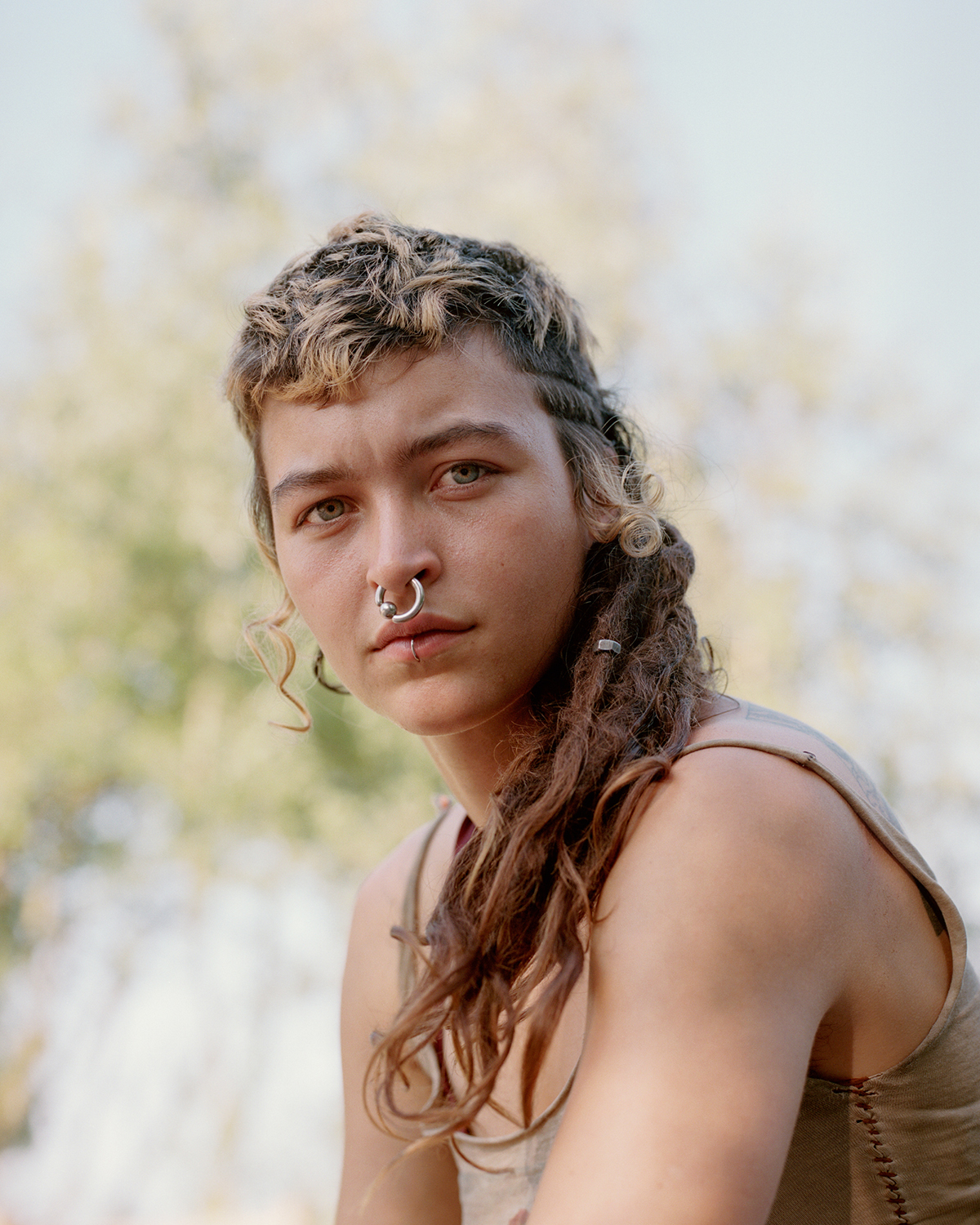 The Docklands Project by Sem Langendijk is an immersive photo project which explores communities who live near water sources. Taking inspiration from his childhood and pairing locations based on their history and current trajectory, The Docklands Project explores our relationship to cities and their place in society.

The Docklands Project currently covers 3 locations showing different types of cultures near water
sources. What was the driving force behind making the work?

I grew up in a former railroad station, where cargo from ships was loaded onto trains. After the
building lost its original function, people started to build self-constructed homes there, as the city
had no use or plan for the area. As this area became a development site in the late 90’s, I moved
further into the harbours of Amsterdam, and living there has had a profound impact on my view
on cities. My initial motivation to start the project was to document appropriation of space in the
docklands of Amsterdam. These kind of areas, and the communities that live there, are under
pressure as the city is rapidly taking back its fringes and developing them. When I decided to
extend the project, to more cities, I conducted my further research in those docklands, using this
as a perimeter for the work. These environments I ended up photographing, share a similar
history, although the current conditions are quite different.

What was the lure to go and document people squatting in the disused docks in Amsterdam?

I didn’t find any photography from where I grew up that captured the identity of that place, as a
document. I felt it would have a personal value for me to photograph these kind of places and
communities. The ADM, which I was familiar with, resonated with the memories I had from my
childhood. A place where people deliberately chose to live in certain conditions, because they
felt they had more freedom, build things, and not be forced into the constructed idea of a home
or city. The fact that they squatted the land, was not really relevant for my point of view at that
time, although it does matter for the bigger story as it gives insight in the limited options people
have to live this way.

The work feels meditative and calm, is there a connection from your past which helped you
relate and connect with the people and place?

Working in this area was very interesting for me. I did connect with the people, although I never
really felt like I was there to document their lives. The work was very meditative for myself, as I
encountered things that resembled memories from my childhood. There was a nostalgic mindset,
and at the same time I was very calm and happy to be spending time in this environment. I think
this state of mind reflected on the people I portrayed, and perhaps helped form a bridge, as I was
an outsider to them. It took some time, but me returning from time to time over the years helped
create trust.

The portraits cover people in sun kissed and peaceful moments. How did you go about merging
culture and life of the location into portraits?

To some extend, I was projecting my own ideas on the culture and life there. Living and working
in a community and place where there was a lot of room to spend your time on doing what you
like. I think this is one of the main reasons for people to live in such a way. This self-empowerment
and freedom, made me focus on individuals, instead of photographing group activities or a
community. For me independency was an important element in the portraits. Their conviction to
this independent lifestyle and their confidence in pursuing this, made me look for the peaceful
moments, I think it is a peaceful lifestyle. To me, this environment was a little haven, where people
weren’t too bothered by the outside world.

How did you go about immersing yourself in this community?
As a photographer, I am an observer and analyse things. Perhaps for that reason, I never really
wanted to immerse myself into this community too much. I revisited over the years and knew
some people there, so at some point people were aware of my existence and presence. But the
project in mind was not necessarily about them, this was about my personal research so I always
kept fairly distant and clear about my intentions. It might seem like I’m close to them on a
personal level, but I’m perhaps just open and at ease around these strangers, because I admired
them. I got to know some people, and a few I had known for long, but the portraits in the series
are taken at first encounters and brief passing-by’s of people I don’t know. This method of
working also relates to my approach in New York and London, where lonely walks and encounters
with strangers in the street form the foundation.

Are there any people that stood out and whose stories really resonated?

To me the portrait of the boy, named Tommy, was in a way looking at myself at a younger age.
These photographs have a special meaning for me personally. There are the stories of people
that had chosen to live at the ADM, because they weren’t accepted in their previous environment.
The community included gay, trans-gender, tough ‘bootwerkers’, artists, people who had nothing
and some who had abandoned all their possessions. They came from all over the world, too. I
don’t feel there was anybody that stood out to me most, as each person had a compelling story
or reason to be there.

Is the Agency one of life one that you’d like to see more common in society and communities?

The reason for me to photograph the life at the ADM, was to incorporate this in a larger story
about the transformation of the city’s fringes. My personal background is in a way represented in
the project in this way. I would like to see this more; perhaps put best, I would like to see this
disappear less. To have these areas that leave room for people to appropriate space and develop
experimental ideas about living, close to a city, can be interesting for research and innovation.
They can serve as havens for people who don’t fit the system.

Currently, these areas are transformed into city districts that serve only one type of citizen.
The question is if we can keep cities interesting and diverse, if we build to attract a very
homogenous population. The interactions between different groups is what makes a city a
breeding ground for new ideas. What I value most from places like the one documented in
Agency, is the fact that these can still be shaped by the people, they can be active and involved
with their surroundings and serve each other in the form of a community. These values are
degraded by current city development, we don’t ‘make’ the city together anymore, we inhabit it

In 2019 the area had the vacate, have you been able to stay connected with the people who had
to leave?

The goal of the project was to make a portrait of the post-industrial city, through the harbour area.
So this former dockland in Amsterdam happened to be where the ADM-community had lived
and shaped their world for 20 years, but I never intended to follow them to a new location. I know
some are living on another piece of land outside the city, and I sometimes cross paths with the
people I had known from before starting the project. At the time of evacuation I also felt there
was a lot of grief, as the community had fought till the end to remain there. I didn’t want to
document this phase of their story. The work, I hope, is to some extend a document for them too,
but my personal involvement with the community has ended for now.

Both NYC and London feel vastly different to Amsterdam in regards to what you’re looking to
communicate. Both focus more on physical social structures through buildings and their
locations. Can you tell me more about the approach behind the two?

In Agency, the focus is more on the people indeed. I think that the relation between the two,
people and place, is part of the project and how it came together. I wanted to document the
conditions of the docklands, and the fact that this community was living there felt like an
interesting example of reusing space. The people were very much defining this place, and the
structures and buildings there. So for Agency, the autonomous and self-made aspect of this
environment resulted in me focusing more on portraits.

My urge to explore similar areas in different cities, let me to New York and London, to their
docklands. I wanted to research the conditions and stages of development, and see if this could
reveal something about the way we think about space and city renewal. In Red Hook the
approach had to be different to tell the story of that place. To use the same approach was to
imply that the conditions, or the way of living was similar, that the community had the same
impact on these places, which wasn’t the case. I also didn’t feel I needed to produce a
confirmation of communities similar to the ADM living in different cities.

I learned there was a decline in interactions on the streets in Red Hook, and started to link that to
the function and design of buildings. The people were less in control of their surroundings, and
therefor I navigated more towards the physical environment and how this affected people. I used
the grid of the streets, started to photograph street-corners, and putting these together as a
typology. It became visible how the old and new were in juxtaposition. Property is becoming
increasingly more abstract with blind walls facing the streets, as if these buildings are turning
their backs towards the community. In London, privatisation of space is used to develop the
docklands, on a large scale. In these streets people have very little interaction with each other,
and the environment felt very abstract and impenetrable. People are present in the work, but they
are photographed unrecognisably.

So in a way, I think the transition from the docklands into new waterfront city districts, which is
happening in all of these cities, goes hand in hand with a decline in social interactions and the
ability for people to shape space into place, people loose the connection to the surroundings. I
chose exemplary locations to photograph, and in the visual approach and editing I navigated
from people towards more abstract images of space.