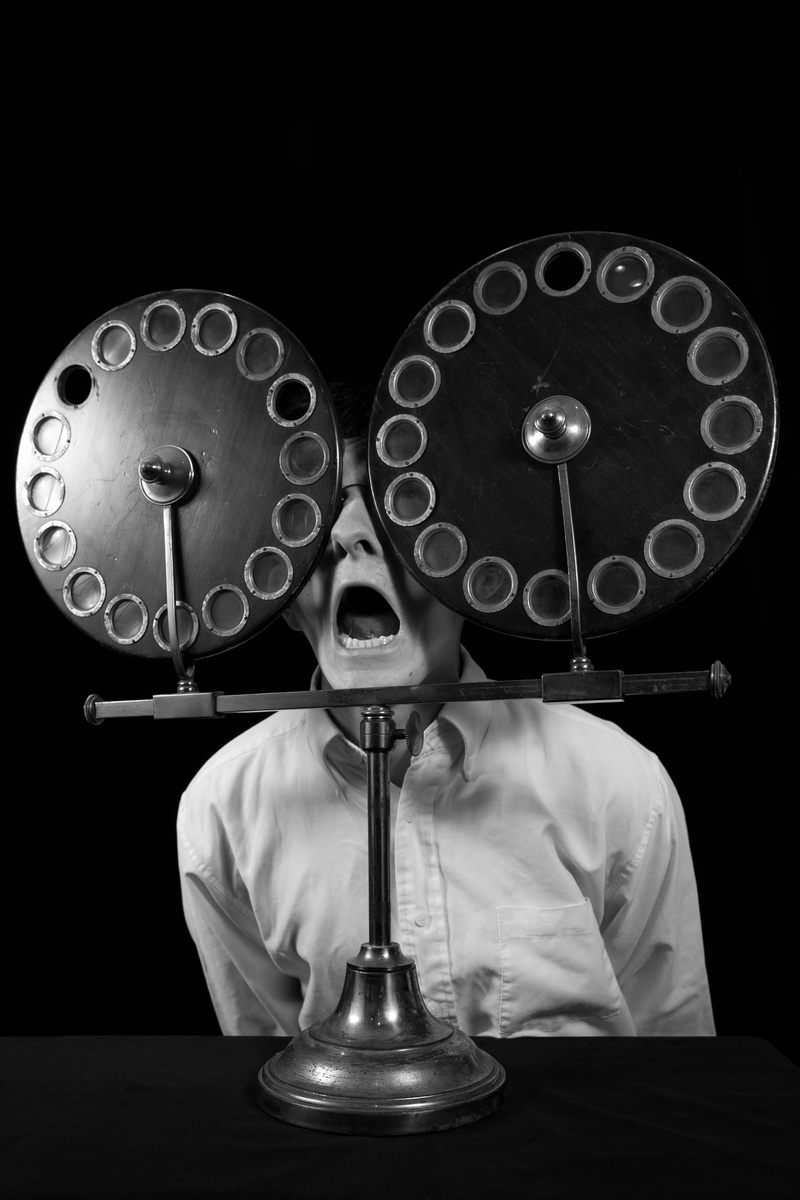 As babies, Alex and his twin brother Harry were unable to see. Stumbling around their tiny worlds, unable to communicate that they were living in a blurry world. The It Stares Back explores this time in their lives, as well as the relationship between two identical twins and their own self identity. Far too often, the rhetoric with identical twins is how they think the same, act the same, are the same. Forming your own sense of self with this additional pressure from the outside world is challenging, a challenge which The It Stares Back explores in forensic set pieces.

The It Stares Back leans on the theory that in the first 18 months of a child’s life, they are autonomous with their environment, simply living with no sense of self. Inspired by the psychoanalysis Jacques Lacan who coined the term ‘The Mirror Stage’ , which is given the early stages of a child’s journey to self expression and finding one’s identity, Colley’s work explores the sense of self and vision, in a staged and archival series of images which digs at the question, what makes us, us? Is it how we see ourselves? How do others see us? How does vision and our understanding of the world around us from formative years impact on the adult?

Within Lacan’s theory, he pushes the narrative that even we are detached from ourselves and what it is to be human, simply playing out human characteristics yet being detached from our early, original programming. With this in mind, Colley’s work feels like it is trying to connect to being human and a relationship with his twin, whilst also pushing forward with this clear visual identity of the self.

The work itself is a performance, with Colley both behind and infront of the camera, creating cinematic stills which feel like they’ve been lifted straight out of a Stanley Kubric or David Lynch feature. Although Harry is not seen in the project apart from archival imagery, it is easy for the mind to be tricked into thinking Harry is appearing without us realising (Colley assures me it’s only him in the portraits).

To me, there is also an underlying darkness to this work. The giant machines used to test our vision, encompassing the subject seem brutal and unforgiving, I’m reminded of images of twins during 1940s Nazi Germany where the Nazi fascination of twins and their ability to combat diseases, led by Josef Mengele were carried out. Perhaps this isn’t Colley’s intention, yet through screaming faces, a clear discomfort, these ideas are brought forward.

With these images which seem distressing, perhaps Colley and his twin battling with machines of vision to find their own self, that sense of breaking a mould, pushing, gnawing and clawing his way out if a pre-prescribed reality, The It Stares Back poses more questions than answers when it comes to our each unique individuality and how our vision of our surround informs us, which any good photographic work should do. These questions are left open, like a beading eye through the lens of a camera,  scanning the world around itself, processing the information.