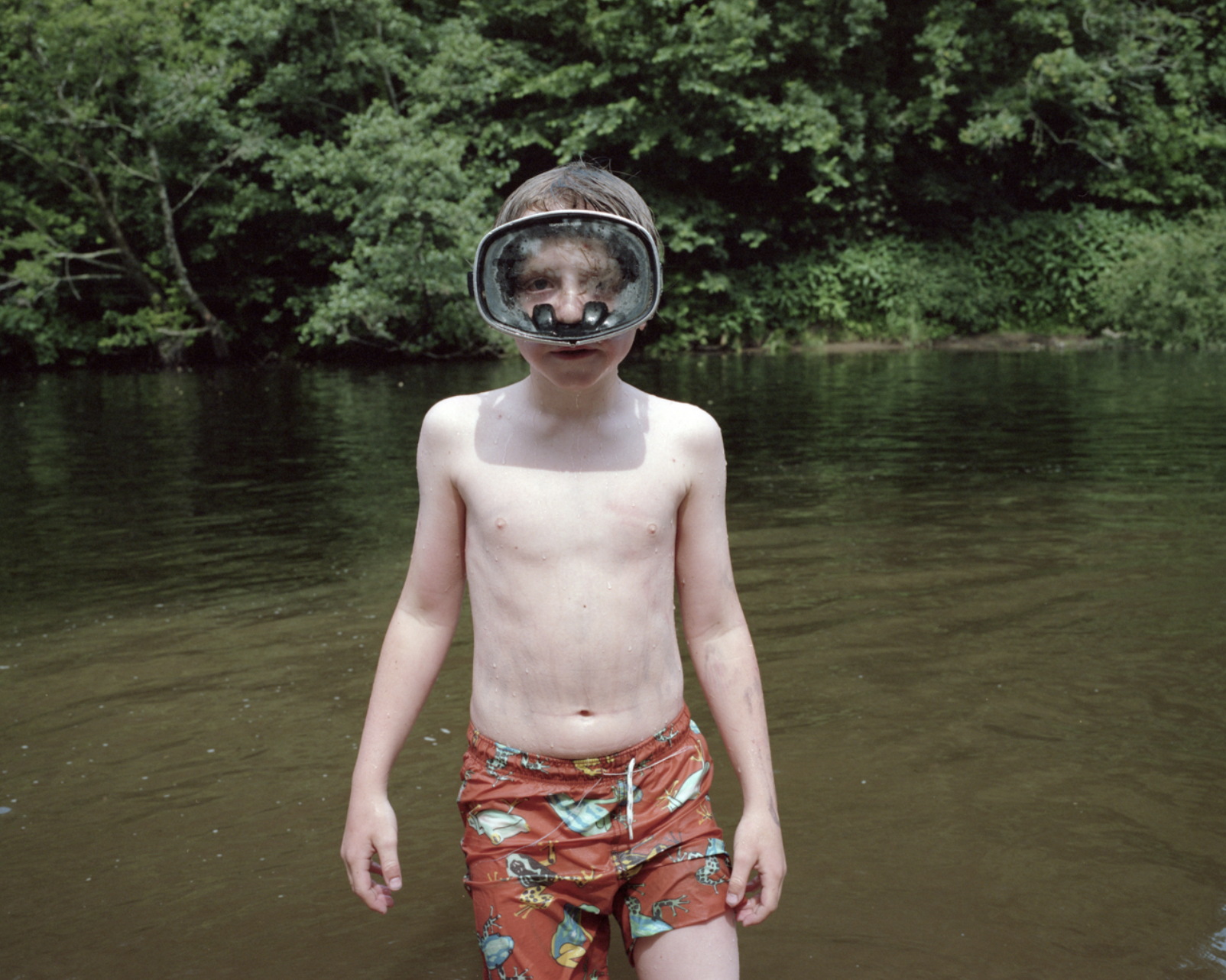 Rivers have long featured in the make up of communities, drawing people to their shores. Thought to imbue healing powers, their waters have been revered since the earliest times, often represent vitality and life. Popular even today through leisure and tourism, sentiments of improving health and rejuvenation through visits of the country continue to make the British Countryside appealing.

It is this embodiment of the countryside that frames Sian Davey’s body of work, The River, documenting her own small community drawn to its water in search of relief from the heat of the sun. With subjects seemingly acting out romanticised rituals of childhood and summer holidays, Davey’s vantage point is both independent of, yet familiar to those whom she is photographing.

You’ll notice that most of the subjects in this body of work are wearing everyday clothes perhaps rolled up to the knee or with a soggy hemline. Save the formal portraits that permeate the series, all those photographed here are apparently done so without being overly invasive in their activities. Davey’s independence as a photographer, drawn to the groups around the water allows her to observe with gritty criticalness that strips the romanticism out of these picturesque scenes. Far removed from the hustle and bustle of our 21st century cities and offices, this river appears as an oasis free from the trappings of social pressures imposed by our everyday lives. Viewing Davey’s work in the context they are removed from whoever imposes the cultural eye they escape.

Personally, Davey’s work transports me back to my own age of innocence of growing up in rural Oxfordshire; gathering berries from head grows as a little girl to make ‘potions’; trudging through trees softly wafting of wild garlic; punting on the Cherwell; being 17; skipping classes to drink beer and swim in the river Henley with boys. All of these instances where the point at which an individual may relax and escape themselves with those who matter most to them, also appear to be when they are at their most vulnerable at the most literal point away from where they ought to be. Childish innocence.

Perhaps that is what both pleasures and troubles me the most about Davey’s images. A community collectively defines how it wants to be seen or represented to the world around them, and indeed, who and what are included (or excluded) from them. In that sense, it frames their members’ private lives like snapshots. It does not hint or elaborate on the lurking darker controversy voyeuristically seen by those outside of that intimate circle. Thus Davey’s photos flirt coquettishly with the sunshine and romance of an ideal summer’s day, whilst bearing silent witness to social currents lurking underneath.

In The River Davey records right of passage for mothers, fathers, siblings and friends.They are united through the playing of games, the intimacy of their touch and the likeness in their clothing. However, each person remains subject to scrutiny, amplified by the presence of a camera. Two women for example, conversing. Hovering between action and inaction on the banks of the river. They look not at eachother but towards something happening out of frame. Children in the water maybe? Boisterous games getting out of hand? Their arrest by Daveyis significant; these women are separate from the group, yet are presented united in front of Davey’s audience. Snatching snippets of conversation, they are bonded at the very least through friendship, and at the most complex level motherhood, brought together through their communities use of the river. Yet these women exude a nervous tension and a sense of confinement. Sheltered under the boughs of a leafy oak tree, they are secluded in the shade from the implied scruitner of their community further up the riverbank. Privacy in public spaces implies secrecy, their confidence in each other at odds with the veneer of light heartedness associated with summer days.

Explored through a numerable array of devices, the reproduction of activity and portrayal is as marked in The River as the feeling of rehearsal, particularly when focused upon younger members of this small community. We see this in the juxtaposition of two portraits,; particularly; one of a woman in a polka dot swimsuit and that of a young girl under the boughs of a tree. We cannot help but scrutinise the woman’s physicality by the framing of her body, in the same way that we cannot help but scrutinise the young girl in a bikini. This woman wearing a polka dot swimsuit in the style of a 1940s pin up girl defines a body image that the young girl is aware of, albeit not necessarily subject to. Wearing a mistmatehce bikini set this girl’s modesty is imposed upon her, the covering up of her body an expectation of development and implied fertility though it is not physically apparent. Both individuals are seuxlaised without being sexual through the regulation of their appearance. What distinguishes one from the other however is the subject’s regard of the camera and the passing of time. There is an air of curiosity in the young woman’s photograph as she is half turned away from, but gazing relaxedly at the camera. The woman with her trim appearance, greying hair and drawn expression in contrast shows the reluctance even resistance to engage Davey’s gaze. (In conversation, Davey recalls this woman’s unease at being photographed.) The Protective gesturing of her hands in front of her torso demonstrates an awareness of her situation; a resolve to be photographed mixed with self-consciousness of being scrutinized by others.

Also in Davey’s body of work, two particular little boys at play, one wearing a facemask to see underwater, another brandishing fishing net. Snorkeling. Paddling. Hunting through the shallows catching unsuspecting creatures not fast enough to get away. What they are in fact doing is playing a most primal game, exercising their desire to catch but not their instinct to kill.

These are the two points that The River keeps coming back to: swathed in strong shadows, light and dark, twilight and failing light, the riverbank in this community skirts the edge of innocence and knowledge. Davey’s subjects appear at their most relaxed, at their genuine and unguarded albeit uncomfortable at their scrutiny. Reproducing nostalgic scenes from previous summers since long passed, I expect members of this community will be visitors here for years to come, with future generations rehearsing their behaviour before longer still. I cannot help but wonder though what else will be taken downstream with the waters from this small community. From tears to laughter, to playmates and heartbreaks, the only true measure of their passing shall be time, on this occasion at least, captured on camera and immortalised on film.

0 comments on “Community and the river with Sian Davey”