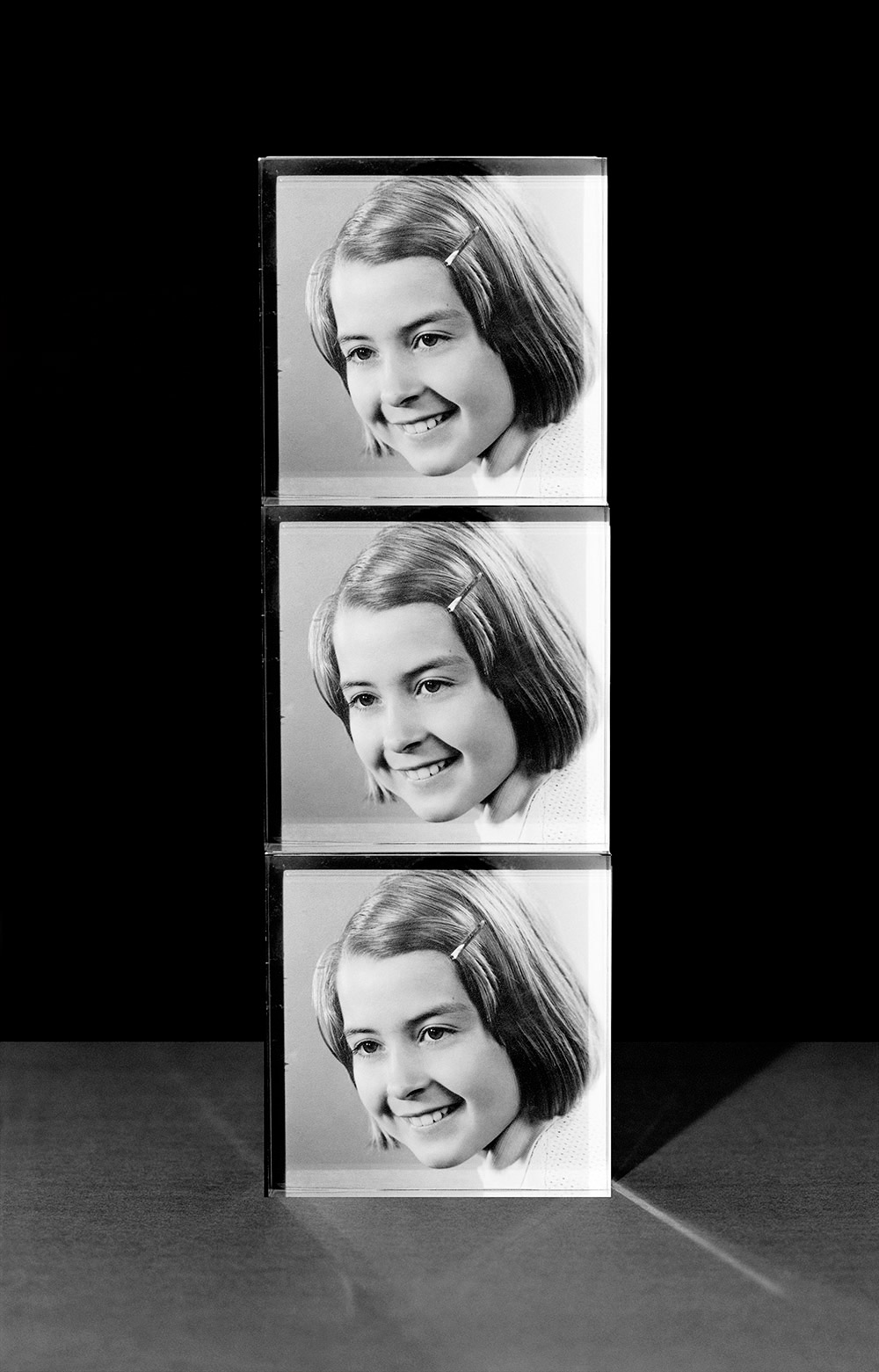 On the 15 February 1993, Peter Watkin’s mother walked off Zandvoot Beach into the North Sea. Her final act haunts Watkin’s series The Unforgetting (2012-14: a poetic exploration of the traces left by such trauma. Watkin’s autobiographical works incorporate a plethora of sculptural elements, such as casting, stacking and obscuring, but more poignantly, they are a meditation on the practice of archiving and remembering: how certain material is preserved or lost through the process of memorialisation. Watkin’s photographs of object assemblages – reminiscent of 16th century cabinets of curiosity – reflect on, but given their subject, are also notable for their lack of tears. While black and white photography is traditionally associated with nostalgia, the work is spared of straightforward sentimentality: objects are catalogued and composed in a manner that evokes early scientific photography or evidence gathered at a crime scene, encapsulating something universal, rather than remaining solely with the overtly personal – the distance of time, perhaps, affords here a mannered approach that is not only clinical, but poetic at the same time.

In the introduction to The Unforgetting you describe it as “an exploration of a personal history that cannot be told with any certainty, but is told anyway.” What drove you to explore this subject? Was it a cathartic process for you?

The fear of forgetting, and consequently an awareness of the limitations and failings of memory and photography, are perhaps the central concern of this body of work. The contradictory motif here lies in the treatment of the personal history as a narrative structure, which seems to preclude access to truth that is purportedly set forth from the title. The realization that this search for truth was futile stemmed perhaps from a series of interviews that I made with key family  members for a film that I never completed. I now think of most films as preparatory research for the resulting, mostly photographic, works that we’re discussing here; but what was interesting and transformative for me was the way the family had reconciled the trauma of loss, into a unified narrative that deviated very little from one person to the next. It was soon after finishing this filming to work that I altered my approach, embracing the ambiguities of photographic representation, turning my attention on the objects archived by my Grandmother, and the village where my mother grew up.

The catharsis, if you can call it that, has come from the time dedicated to the subject, as well as in terms of the intellectual and emotional work invested. I suppose there is a great deal more that is withheld than revealed in this body of work, but this has been a particularly important part of the project: the tension between revealing and concealment.

I think this idea of revealing and concealment is most prevalent in the studio images of super 8 film, the accordion and other personal objects. Their function is obvious but their personal relationship to your family history remain a mystery.

Yes absolutely. Still life has a long history of placing the everyday and overlooked from center, using a language of symbolism that goes beyond mere function and form. These still life photographs go beyond mere function and form. These still life photographs were made up of objects or combinations of things taken from my Grandmother’s house in Germany – in fact all the photographic work was made there. I’ve come to think of her house as a kind of living museum or archive in a sense. Little changes, everything is categorised and organised in a way that meaning seems fixed, or has already been attributed to things according to an overarching narrative that constitutes her life. Isolating these objects out of this context seems to point them towards their value or importance as part of a greater whole. Three of the photographs (Super 8, Roemer Glasses, and Ute), which are considered a  set, deal both figuratively and abstractly with this idea of transparency and opacity, revealing and concealment. In Super 8, reels of home movie footage – containing images of my motherf as a child, holidays from the 70’s, and so on – are placed before the camera. The images contained are fascinating, and personally insightful, but here their treatment is to be reduced down to a singular, uniform image. There is a push and pull between being offered access to some personal remnant, and the opacity offered up by its photographic representation, which points towards a more universal reading. There are of course stories bound up within all of these objects, but not necessarily illuminated in any detail by the photographs. In my mind, they come to stand for something greater than a small personal piece of information.

Do the assemblages of image and object reference specific events? Or deal with photographs failure to truly represent memory?

I suppose it’s a mixture of both things really. The object assemblages work in different ways, sometimes referencing my memories, but usually going temporally beyond the reach of my memory, mixing up family histories and containing hidden stores – a temporal shift beyond one person’s memory. There is a photograph of a log with an axe embedded in its surface with a photograph of my Grandfather as a young man rested against it. This references memories I have from childhood of my Grandfather chopping and setting wood around our house, but also from the last time we spent time, doing this very activity. There is a physical, concrete casted log, which is also exhibited, reproduced three times, and rested upon a steel plinth. They are at once an indexical imprint of the object, but not the object itself; objects devoid of colour as on the most part the accompanying photographs are. I suppose the task is interpreting something inherent to the fabric of memory and time, and of course there is a part of this that acknowledges the inadequacy of memory, but the work is more concerned, perhaps, by its parameters, and its elasticity when explored. Memories aren’t fixed; their form is forever changing, so undertaking work such as this seems to give them a form, an output, but this transforms that purer, internalised form of memory, the kind of memories we rarely share with other people. There is always that kernel of truth at the very center of all this, and that’s worth pursuing.

Wood features across a series of images, being presented to the viewer before being chopped up. What is the symbolism of this in the project?

I guess there is a lot in the recurrence of wood that speaks to me of Germany, of folklore, the forest, and rural life. The German side of my family are form a small village in the south of Germany – a bit of a time capsule really. Wood is used in different references, such as the waterwheel of my great-great-grandfather’s sawmill, the photograph of which obscures the face of my great-uncle, who drowned in a waterfall before I was born. There is the aforementioned photograph of my grandfather, the concrete casted logs, stacked wood, and such. Perhaps most ambiguously is the photograph of the cropped arm of my brother suspending a large, split piece of beech wood in a half domestic, half studio environment. There are a few things that I like about this photograph – the way the weight of the object can’t be ascertained, as well as locating a reason for its presentation, and the way the wood seems to flow organically out of his hand, like hair or water – but mostly I like its resistance to straightforward interpretation – it keeps you guessing, and there is this idea of suspension that works on various levels. I can still look at this photograph and find new meaning in it, the ambiguity of which in this case is attractive.

The series is largely Black and White, but in parts changes to colour, such as in the image of the Baptismal dress which is behind yellow glass, What brought this change of focus?

The work titled Taufe is perhaps one of the most integral pieces in this body of work and is a photograph of a suspended baptismal dress that belonged to my mother. She is really at the heart of all this, the subject that the rest of the work emanates from. It’s a black and white photograph, glazed in yellow glass. The dress appears to float, a weightless suspension in the center of the frame. There is something in the indeterminate scale of the dress that is fascinating to me; the way the fabric hangs in relation to the curtain and obvious corollary to themes of water, suspension, and the symbolic representation of death in the Christian baptismal tradition. There is a certain truth found in this remnant and in the contours of the dress and how it hangs along with the flowing gauze of the curtain. The yellow glazing that colours the photograph is thought here as a wash that is secondary to the photograph, but also of the fascination of putting colour back into the image, of trying to put the yellow back into the dress, so to speak. Colour is used here to move closer to the object, before abstracted by the photograph, yet somehow its colour inhabits the space of dreams and hallucinations, and an uncertain reality. The dress is of course yellow, but the yellow of the glass is not the yellow of the dress. Something that comes to mind is Wim Wenders’s film Wings of Desire and the interplay between colour and black and white, which of course is used here to signal a shift in reality. Quite crudely put, the sepia-toned black and white, in which the film is wrapped around, comes to represent the world of angels, the infinite, eternity, and is largely our visual register throughout. When the angel Damiel comes crashing down to earth, relinquishing his immortality and thus falling into the human condition, he also makes a fall into colour. He intuits, experiences, and bleeds in full cinematic Technicolour. Colour comes to represent the living, and the human condition and our place in the continual present.